This report aims to provide a forecast on the future price of gold and the possible elements that may affect it. We will present factors that may have been unnoticed and may result in a revision of expectations.

Earlier in 2021, gold was forecasted to close the year at a minimum of USD 2,100 per ounce. However, many of the possibilities were still clouded amidst a once-in-a-century event, the COVID-19 pandemic.

Much has changed since January and even since June. Global economic growth prospects have changed, alongside interest rate expectations and the state of the pandemic.

We will go through the major factors affecting the precious metal’s price and try to assess their possible impact to develop a target range for the price of gold.

The monetary stimulus from the FED has kept gold’s price buoyed on the fear of continued acceleration in inflation.

However, the FED’s mandates are all pointing in the direction of reducing the stimulus, and that is likely to start this year.

At the time of publishing this article, the FED was buying USD 120 billion per month, split between U.S. Treasury bills and mortgage-backed securities.

The FED Vice Chair, Richard Clarida, said in early August that if the U.S. economy continues to recover as expected, the central bank will be ready to undergo a taper.

On the other hand, the massive Fiscal stimulus by the Biden Administration has been largely priced in, while a large part of the pandemic-driven fiscal spending will be aimed at the infrastructure and could take years to bear any fruits. Any additional stimulus checks are unlikely to constitute an upside risk to inflation.

10-year Treasury yields are around their highest in a month and are still rising. Yields increase on treasuries when prices decrease, reflecting lower demand.

This usually means two things, investor confidence is rising and their demand for safe assets has lowered, and most importantly, the expectations for future interest rates have increased.

An earlier-than-expected tightening in the Monetary Policy reflects positively on bond yields as investors will not choose to buy these assets unless they start offering better returns (yields) to reflect the increase in interest rates. This will continue to dampen the outlook for gold.

Additionally, the June FED economic projections have seen more of its members leaning into an early tightening, adding to the possibility that a rate hike might come early 2023 and even in 2022.

The following chart is the FED’s Dot Plot, which plots how members of the Federal Open Market Committee (FOMC) see the timeline of raising interest rates. Compared with the FED’s projections in March, seven members voted on the possibility of a rate hike in 2022.

Still, the main benchmark for altering Monetary Policy remains the job sector, which is giving out mixed readings month after month. 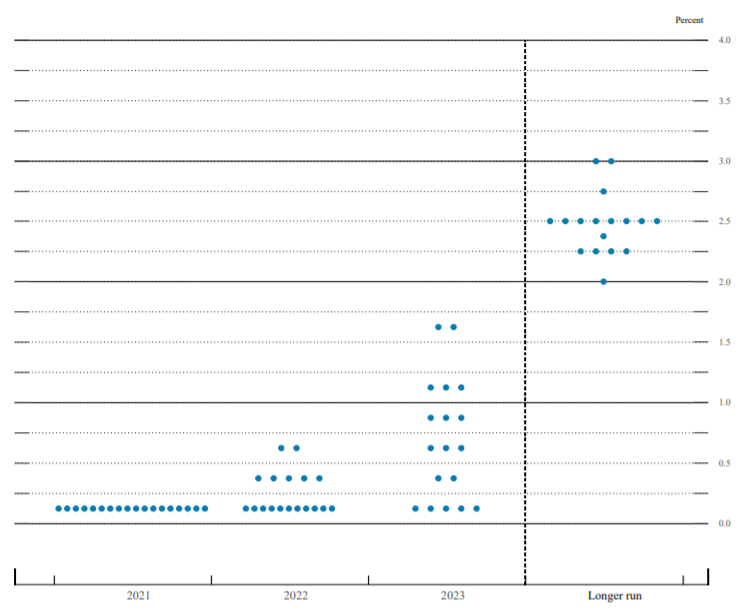 More on the previous point, the real rate, which is the treasury yield minus the consumer price index (CPI), has been largely negative in the U.S.
Also, Treasury Inflation-Protected Securities (TIPS) are mainly in the negative.
Inflation in the U.S. has been rising at a higher-than-expected rate since March 2021, which means that even if yields continue to go up, the real yield will still be lower as inflation continues to shoot higher.
This has an inverse correlation with gold prices; the lower the yield, the better the outlook for gold.
Gold is seen as a hedge against inflation, and investors turn to it in order to protect the value of their money against rising inflation.
The FED, however, has said that this is most likely a transient phase for inflation, and it will fade shortly. 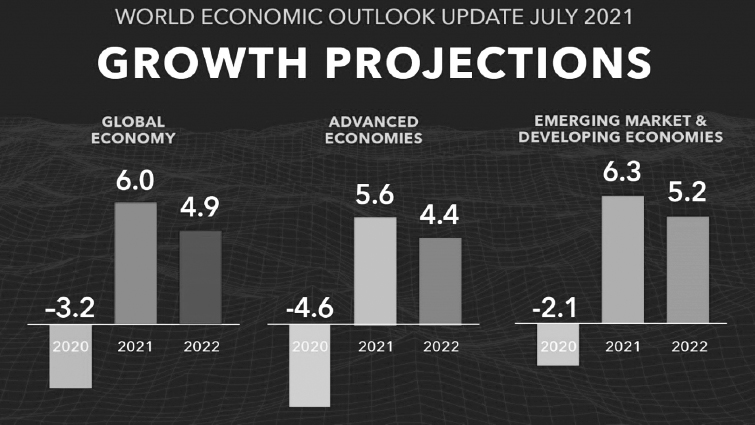 The U.S. Dollar has witnessed a resurgence since late May, caused by a recovery in the U.S. economy and the looming change in the U.S. Monetary Policy compared with other central banks’ policies that are still relatively dovish.
The European Central Bank, the Bank of England, the Bank of Canada, and the Reserve Bank of Australia have shown no indication of following the FED’s footsteps in tightening policy.
The U.S. Dollar Index, which measures the value of the U.S. Dollar against a basket of major currencies, has gained around 4% since May 25 and is nearing its highest levels since November 2020, as we can see in the chart. 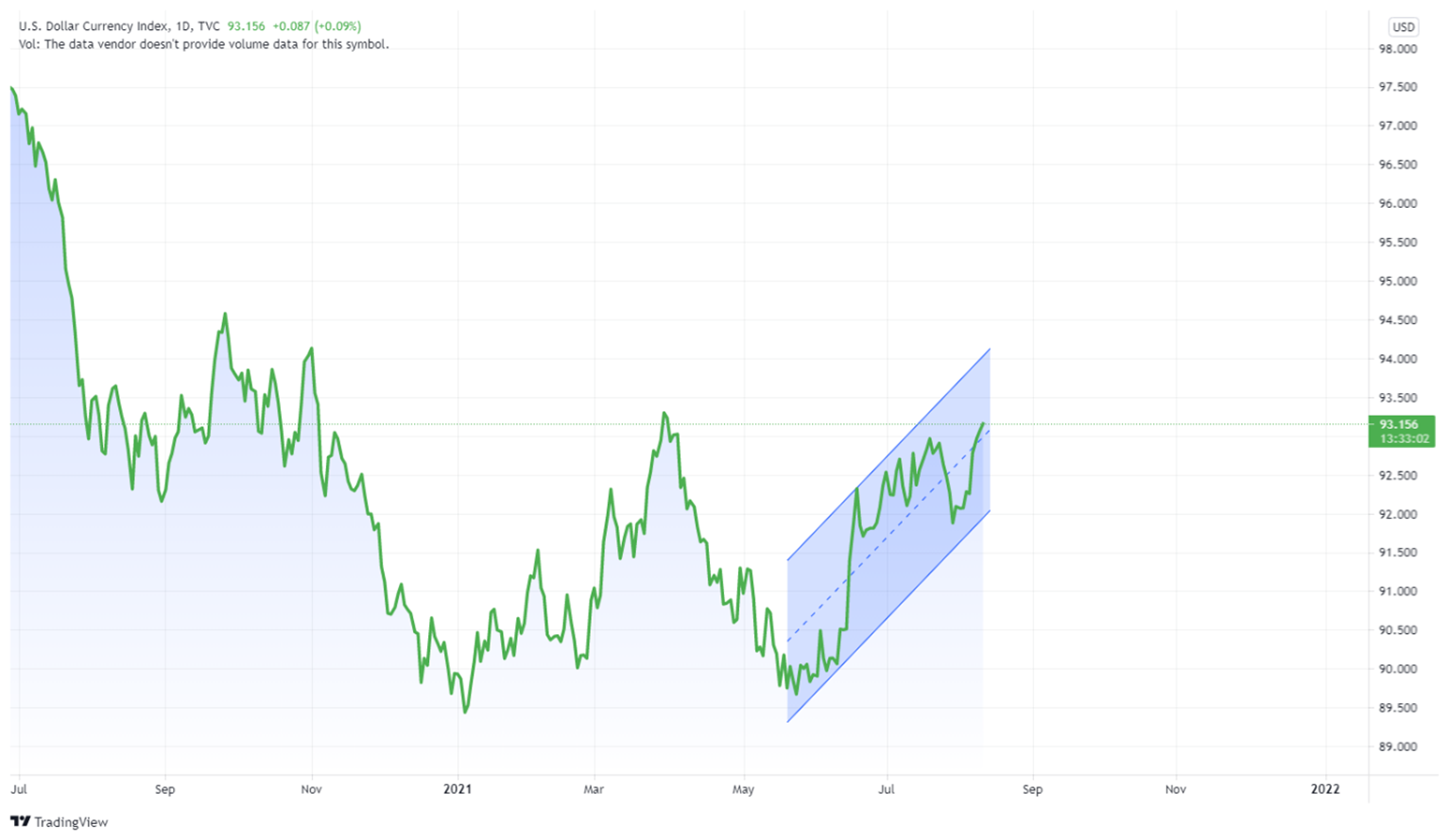 The U.S. Dollar’s outlook technically and fundamentally is rosy for the rest of the year, negatively affecting the outlook of gold. U.S. Dollar-denominated assets, such as gold, become pricier to acquire as the value of the U.S. Dollar rises.

Most of the aforementioned factors have been largely aided by the accelerating rate of vaccinations around the globe and declining COVID-19 infections since the start of the year.
People have returned to mingle and are starting to resume relatively normal lives as the fear of the pandemic faded.
With that in mind, the recent emergence of the Delta variant of the coronavirus is placing doubt on all the positive expectations around the world.
The following line chart shows a resurgence in new confirmed COVID cases around the world. 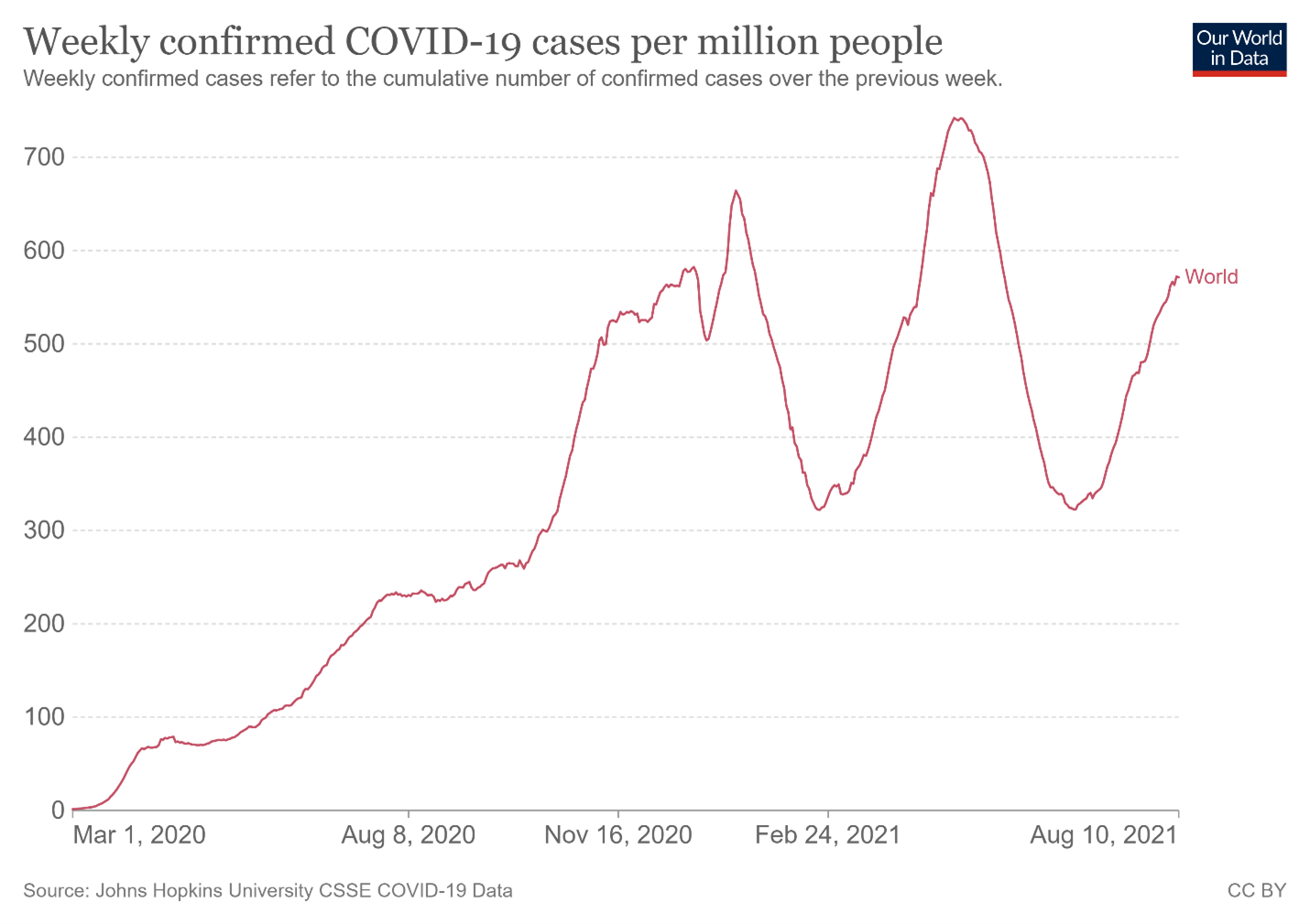 Should cases continue in the same trend, governments will likely start taking actions that might impede the rate of recovery.
Capital flows might start fleeing to gold in fears of renewed lockdowns and slower economic performance.

The following chart shows that the impact on gold price expectations continues at a lower rate the more we go further in time. It displays future contracts for December for the four years ending in 2024.
The outlook changed for gold, but it should be noted that looking more than one year in the future is highly inaccurate and subject to a lot of change. 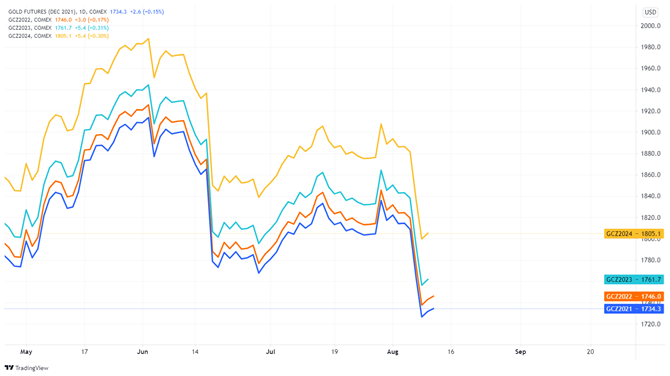 Black Swans are events that occur unexpectedly, with markets being unprepared for them. Social unrest, a real estate or a market crash, or messy elections, such as the German Bundestag elections in September, could be considered as Black Swans.
Another example is the possible emergence of dangerous coronavirus variants like the Delta.
These events bring home the precious metal’s appeal as a safe haven and as a hedging tool.

The downtrend that started in August 2020 continues to make lower lows and lower highs, but the upper range of the trend Is being tested.
Prices have now successfully closed above both the 20-week and the 50-week moving averages (M.A.s).
The 20-week M.A. crossed the 50-week M.A., forming what is known as a “Golden Cross”, which is a bullish sign.
The MACD is starting to move above the signal line, while also converging with price action.
Also, prices are now trading in the lower Bollinger channel and even touched the lower band.
The 1685 proved to be a powerful support level that has sent prices above their medium-term average.
The current correction is required to send prices upwards of the USD 1850 mark and even then, the USD 1900-1910 area will act as major resistance that will test this correction.
Falling below the USD 1800 mark means the price will trade below its 50-day moving average would put the commodity back in its bearish trend.

Outlook: To the Downside

The downtrend is still valid, but a reversal is still in the realm of possibility. The fundamentals are mostly bearish for gold, bar any pandemic-related setbacks.

DISCLAIMER: This content is for presenting general information only. Any research or information mentioned here is objective and does not take into regard your financial position, investments, or objectives. INGOT Brokers (Australia) Pty Ltd accepts no responsibility for any use that may be made of these comments and for any resulting consequences. We do not give any warranty in regard to the completeness of this information or its accuracy and thus its use. Leveraged trading carries a high risk and is not suitable for all, and anyone who uses leverage is doing so entirely at their own risk.