Will the FDA Approve Merck’s Pill as a Cure for COVID-19?

In a statement released on Friday, drugmaker Merck & Company said that its new pill, Molnupiravir, reduces COVID-19 deaths and hospitalizations by 50% in newly infected individuals.

When the drug was consumed by COVID-19-positive patients during the first five days of showing symptoms, it resulted in 50% less death and hospitalization rates than those who received a placebo or a “dummy” pill.

The study released by Merck and Ridgeback Biotherapeutics covered 775 adults across Latin America, Europe, and Africa, who were at a higher risk for contracting severe diseases with mild-to-moderate symptoms.

Merck stated that the drug’s data would be sent to the U.S. Food and Drug Administration (FDA) for review in the next few days.

An independent board of medical experts monitoring the trial said that the drug is showing strong results. Thus, they recommended stopping the trial, suggesting no further testing before applying for the FDA approval.

The company had planned to test the drug on more than 1,500 patients before it was stopped early.

If the FDA clears it, the pill would be the first to treat COVID-19, which is a possibly vital breakthrough in the fight against the pandemic.

The FDA has approved previous treatments for COVID-19, but all of them had to be given by injection or IV in medical clinics or hospitals, compared to Merck’s convenient pill.

Merck added that it could deliver 10 million doses by the end of the year and is already preparing contracts with multiple governments worldwide. The U.S. government is reported to have committed to the purchase of 1.7 million doses.

Merck’s share price jumped to its highest in 20 months on Friday.

The FDA will reportedly activate its expanded-access protocol, which would allow compassionate use of the pill.

This will come into effect before the FDA’s official evaluation, and it would take months before the approval for emergency-use authorization (EUA).

Merck’s pill, Molnupiravir, named after Mjolnir, the mythological weapon wielded by Norse God Thor, supposedly will save many lives from the grasp of COVID.

The FDA has a precedent to activate the expanded-access protocol regarding COVID when activated for the “convalescent plasma” for months on end last year before it was given the EUA.

This protocol would allow the general administration of the pill, and the results can be tracked so that it might hasten the full approval of the drug by the FDA.

Pfizer’s shares have risen more than 50% in the ten months following the announcement of its COVID-19 vaccine. Johnson & Johnson, BioNTech, and Moderna shared substantial gains in their share price as well.

However, these companies’ shares have declined since August as investors started having doubts about future vaccine sales.

Friday’s news exacerbated these worries, and most of these companies opened on negative gaps or considerable drops in their share prices. 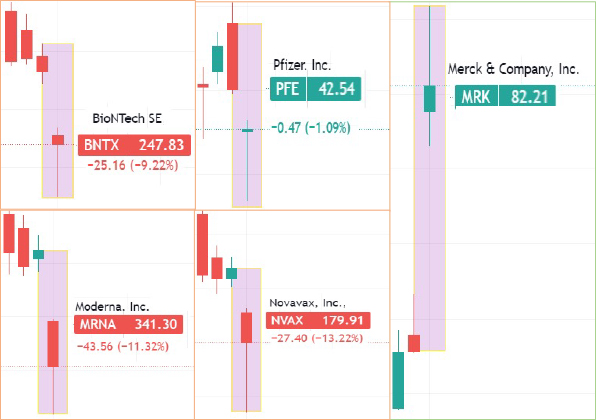 Should the FDA approve the pill, Merck & Co. should have the first share of the market and sales expectations should send its share prices into a comfortable uptrend.

DISCLAIMER: This content is for presenting general information only. Any research or information mentioned here is objective and does not take into regard your financial position, investments, or objectives. INGOT Brokers (Australia) Pty Ltd accepts no responsibility for any use that may be made of these comments and for any resulting consequences. We do not give any warranty in regard to the completeness of this information or its accuracy and thus its use. Leveraged trading carries a high risk and is not suitable for all, and anyone who uses leverage is doing so entirely at their own risk.