What are Central Banks?

The central bank is the heart of any economy as it is responsible for keeping the country’s financial system or money supply strong. In other words, central banks are the regulatory authority of a country's Monetary Policy.

It is preferred for central banks, such as the U.S. Federal Reserve Bank (FED), to remain separate from the government fiscal policy so as not to be influenced by any internal or external political pressure.

For incident, Former U.S. President Donald Trump tried to push the FED to decrease its interest rate, backing his argument with the U.S. jobs report that repeatedly showed positive results until the pandemic emerged. However, the FED decided to remain at an interest rate between 0.25% - 0.50%, ignoring all pressures from Trump’s administration.

How do central banks work?

To maintain price stability, central banks control inflation levels by overseeing the money supply and managing the Monetary Policy, which we will further discuss throughout the blog.

By using open market operations (OMO), central banks manipulate inflation levels by providing liquidity to markets. Meaning, as long as there is more money circulating in the markets, the prices of products and services will continue to increase.

Central banks also have the authority to decrease the interest rates of loans, which in turn drives people to borrow more. Moreover, they purchase bills, notes, and government bonds as part of a policy called “Quantitative Easing”, causing money supply and liquidity to surge.

This is more concerned about commercial banks, which when suffering from lack of liquidity, turn to central banks in order to borrow additional funds using a discount rate set by the central bank itself. This gives the financial system the strength and required stability to serve the country.

In times of turmoil, the central bank lowers this discount rate, thus allowing for increased demand from commercial banks to gather more cash. However, this comes with risks of inefficient financial market and inflationary pressures.

Central banks can also demand the commercial banks to keep a reserve known as the deposit ratio to decrease the liquidity risk, or in some cases, the default risk.

The Monetary Policy is a set of tools that central banks use to control the supply and demand of their countries either by decreasing or increasing the interest rate.

The main idea is to increase the interest rate whenever an alarming rise in inflation or unemployment rate is seen. When that occurs, the central bank increases the interest rate on loans to discourage lending, which reduces spending that usually causes higher demand for goods and services, consequently higher inflation.

This situation can also be reversed, as central banks can decrease the interest rate on loans to urge people to borrow and spend.

To better understand the idea, let’s take an example.

In 2019, Donald Trump kept pushing the FED to raise the interest rate because of the positive employment report. However, the FED did not respond as it thought the time wasn’t right yet. 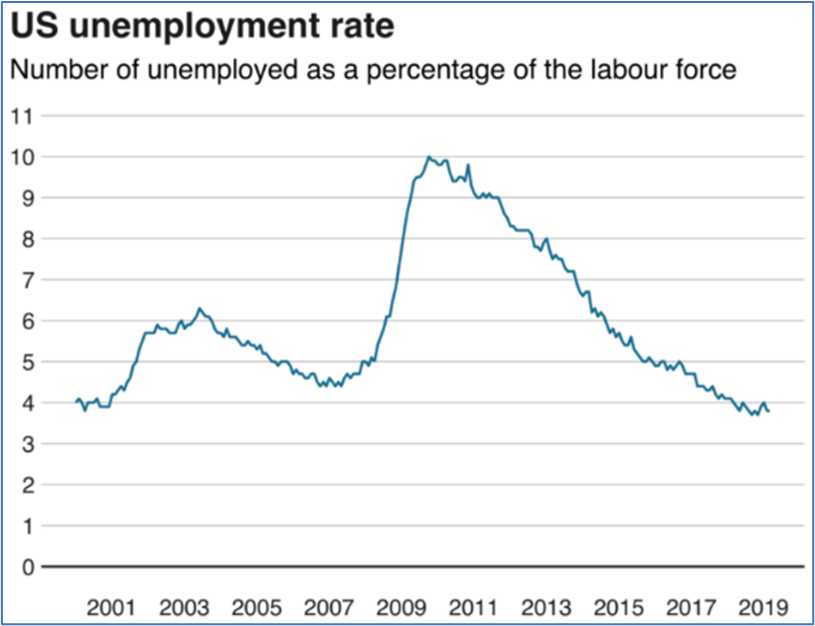 As seen in the snippet above, the unemployment rate was at its lowest level since 2002, yet the FED did not find a good reason to raise the interest rate.
After, the pandemic occurred and changed the whole scenario. In March 2020, the FED cut the interest rate to become between 0% - 0.25%, causing the markets to open at a gab.

But what would have happened if the FED did not cut the interest rate in March?

Simply, the U.S. government would have failed to control economic stability!
At the start of the pandemic, people lost their jobs in anticipation of the drop in economic activity.

If the FED and the U.S. government did not take drastic measures such as cutting the interest rate, the drop in spending and economic activity would have led to a massive cash and liquidity crunch. This would have driven businesses to fail meeting their operational and finance costs, ultimately resulting in another global crisis!
To conclude, central banks have a pivotal role in keeping economies under control, which can be done through the management of market money flow and interest rates.